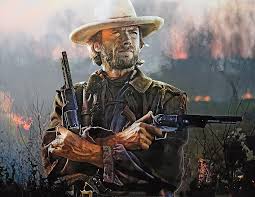 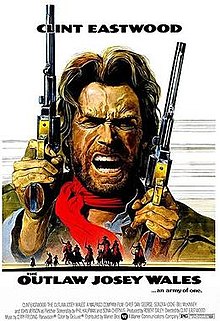 The Outlaw Josey Wales is a 1976 American Revisionist Western film set during and after the American Civil War.[3] It was directed by and starred Clint Eastwood (as the eponymous Josey Wales), with Chief Dan George, Sondra Locke, Sam Bottoms, and Geraldine Keams.[4][5] The film tells the story of Josey Wales, a Missouri farmer whose family is murdered by Union militants during the Civil War. Driven to revenge, Wales joins a Confederate guerrilla band and makes a name for himself as a feared gunfighter. After the war, all the fighters in Wales' group except for him surrender to Union officers, but they end up being massacred. Wales becomes an outlaw and is pursued by bounty hunters and Union soldiers as he tries to make a new life for himself.

The film was adapted by Sonia Chernus and Philip Kaufman from author Asa Earl "Forrest" Carter's 1972 novel The Rebel Outlaw: Josey Wales (republished, as shown in the movie's opening credits, as Gone to Texas).[6] The film was a commercial success, earning $31.8 million against a $3.7 million budget. In 1996, the film was selected for preservation in the United States National Film Registry of the Library of Congress for being deemed "culturally, historically, or aesthetically significant".

Josey Wales was portrayed by Michael Parks in the film's 1986 sequel, The Return of Josey Wales.[7] His wife Laura Lee was played by Mary Ann Averett in the sequel.

Josey Wales, a Missouri farmer, is driven to revenge by the murder of his wife and young son by a band of pro-Union Jayhawker militants from Senator James H. Lane's Kansas Brigade, led by the brutal Captain Terrill.

After grieving and burying his wife and son, Wales practices shooting a gun before joining a group of pro-Confederate Missouri bushwhackers led by William T. Anderson, taking part in attacks on Union sympathizers and army units. At the conclusion of the war, Josey's friend and superior, Captain Fletcher, persuades the guerrillas to surrender, having been promised by Senator Lane that they will be granted amnesty if they hand over their weapons. Wales refuses to surrender, and as a result, he and a young guerrilla named Jamie are the only survivors when Terrill's Redlegs massacre the surrendering men. Wales intervenes and wipes out many of the Redlegs with a Gatling gun before fleeing with Jamie, who dies from a bullet wound after helping Josey kill two pursuing bounty hunters.

Lane forces a reluctant Fletcher to assist Terrill in finding his friend and puts a $5,000 bounty on his head, attracting the attention of Union soldiers and bounty hunters who seek to hunt him down. Along the way, and despite his aversion to traveling with company, he accumulates a diverse group of companions. They include an old Cherokee man named Lone Watie; Little Moonlight, a young Navajo woman; Sarah Turner, an elderly woman from Kansas; and her granddaughter Laura Lee, whom Wales and Little Moonlight rescue from a group of marauding Comancheros. Josey and Laura later sleep together as do Lone Watie and Little Moonlight. At the town of Santo Rio, two men, Travis and Chato, who had worked for Grandma Sarah's deceased son Tom, join the group. Travis and Chato are soon after captured by Comanche tribe leader, Ten Bears.

Wales and his companions find an abandoned ranch once owned by Tom and settle in . Then Wales rides off to Ten Bears camp, parleys and makes peace with the neighboring Comanche tribe leader, Ten Bears. Wales rescues Travis and Chato and brings them back to the ranch. Meanwhile, a bounty hunter whose partner was gunned down by Wales at Santo Rio guides Captain Terrill and his men to the town. The following morning, the Redlegs launch a surprise attack on the ranch. Wales's companions open fire from the fortified ranch house, gunning down all of Terrill's men. A wounded Wales, despite being out of ammunition, pursues the fleeing Terrill back to Santa Rio. When he corners him, Wales dry fires his four pistols through all the empty chambers before holstering them. Terrill attempts to draw his cavalry sabre, but Wales grabs the blade and stabs him through the chest, finally avenging his family.

Returning to the Santa Rio saloon, Wales enters to find the locals are telling Fletcher, along with two Texas Rangers, how an outlaw named Josey Wales had recently been killed in Monterrey, by five pistoleros. The Rangers accept the story, along with a signed affidavit, and move on, while Fletcher says nothing about Wales and pretends not to recognize him. After the Rangers ride off, Fletcher says that he will go to Mexico to look for Wales himself and try to tell him that the war is over. Wales says, "I reckon so. I guess we all died a little in that damned war", before riding off.